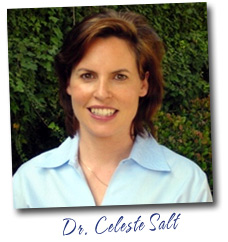 Dr. Celeste Salt is a diplomate of the California Board of Chiropractic Examiners. She is licensed by the State of California as a Radiography X-Ray Supervisor and Operator. She did her undergraduate studies in Kinesiology at Simon Fraser University in Vancouver , British Columbia . Dr. Salt went to Palmer West Chiropractic College in San Jose , California . She graduated March 1996 with her Doctor of Chiropractic Degree. She then moved to San Diego to join her husband, Dr. Mark Salt to begin practicing.  Together they opened Salt Family Chiropractic in 1999.  In 2007 they opened their most recent office in Eastlake.

Dr. Salt currently utilizes a variety of techniques including Diversified, Cox Flexion/Distraction, Thompson Drop and Activator methods in her practice.

Dr. Salt is an active member in the California Chiropractic Association and the Pediatric Association.  She is licensed to use Class IV Laser Therapy, which was incorporated into the Eastlake clinic in 2010.

Dr. Celeste Salt works mornings at the Eastlake clinic. The rest of the time she is a busy mom looking after their son and daughter. 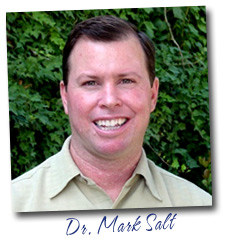 Dr. Salt graduated from Palmer Chiropractic College-West in 1993. He was the Athletic Director of the College in 1992. Dr. Salt is the Past President of the California Chiropractic Association- San Diego District.

Dr. Salt is an active member of the California Chiropractic Association.  He was a previous member in the Chula Vista Chamber of Commerce.  Dr. Salt is licensed to use the Class IV Laser, which was incorporated into the Eastlake clinic in 2010.